The Hidden Treasures in the Image of Our Lady of Guadalupe

Dr. med. vet. Edith Breburda, Ph.D.
In 2015, high-end designers Domenico Dolce and Stefano Gabbana called “genetic manufactured children” synthetic designed babies. Later on, and only after the protest of Elton John, Domenico Dolce apologized for using the term to describe “chemical children.” Dolce and his partner did seek a surrogacy as it was the only possibility to arrange a pregnancy for them. As one way of the many assisted reproductive technologies, commercial surrogacy, often linked to fertility tourism, uses a donor egg or sperm and will result in a child that is not genetically related to one of the “intended parents.” Gestational surrogacy was first achieved in April 1986, (1) and most often depends on in-vitro-fertilization. Otherwise, the surrogate’s egg is fertilized in vivo. The so-called traditional surrogacy was first invented in animal breeding and does not rely on the transfer of the embryo into the mother’s womb.
Domenico Docle and Stefano Gabbana’s baby was ultimately created by in-vitro-fertilization with a surrogate mother. Nevertheless, Dolce opposed genetically designed children.(2) In this regard, it is also important to stress the dehumanizing of women, valued only because they produce oocytes.
The artificial creation of an embryo in a lab dish, i.e., in-vitro-fertilization, mapped out the path to frozen-embryos, surrogate motherhood, human embryonic-stem cell research, cloning, chimeras, genetic editing, genetic engineering, CRISPR-cas9 and whatever we used before in animals or plants.
Besides, it is common to provide pre-implantation genetic diagnosis (PGD), also known as embryo screening. This technology can be conveniently combined with the creation of embryos. Many fertility centers claim that the first five days after conception determine the “success-rate” of an in-vitro-fertilization. Still, besides the goal to optimize embryonic development in the environment of a laboratory dish, no more than 25% to 60 % of human embryos progress to the blastocyst stage. Only the best blastocysts will be transferred on the fifth day after conception into the uterus. At that stage, the embryo has been developed into two distinct cell types and a central cavity filled with fluid. The cells surrounding the blastocyst cavity, the trophoectoderm will form the placenta. The group of cells located in the inner cell mass, the embryoblast, is a human being in the early stages of his or her life.
The embryoblast became of major interest for scientists, since cells derived from them have the potential to differentiate into all the derivates of primary germ layers ectoderm, endoderm and mesoderm. Thus, these pluripotent indefinite self-replicating embryonic stem cells are crucial for all tissue and organ development. Researchers referred to them as the gold standard. Besides the invention of induced pluripotent stem cells created without the destruction of a human embryo, scientist remain convinced to further progress with the reprogramming of adult cells beyond their embryonic like pluripotent character. They want to be able to generate sperm and egg cells. The success of genetic research depends on embryos.
More than ever people are fascinated by the possibility of therapeutic intervention in the deep structure of the human genome.(3) The first five days of human embryogenesis, -in vivo- hidden from the interreference and exploitation of scientists, determines -in vitro- one’s destiny.
We all know what happens in embryogenesis. In case you are wondering, after natural conception we start to grow fast and divide into many cells. As the embryo wanders down the fallopian tube it will enter the uterus after the 3-4 days of life.
In the past, fertility clinics transferred the embryo on day three into the uterus. On that day, embryos are still passing through the fallopian tubes. Due to the “inherent weakness of human embryos” the procedure was postponed to day five. In order to provide “high quality embryos which are capable to continue development and result in live births.” (4)

The fifth day after conception might play another role in human history.
On December 8, 1854 Pope Pius IX made the infallible statement that the Virgin Mary, the mother of Christ, was conceived without sin and her conception was thus immaculate. The ex-cathedra ruling was defined 1870 during the First Vatican Council.
The feast of Mary conceived without original sin and without the deprivation of sanctifying grace, dates back to the seventh century. In 1830 St. Catharine Laboure was asked by Mary to create the Miraculous Medal containing the words, Ô Marie, conçue sans péché, priez pour nous qui avons recours à vous. ("O Mary, conceived without sin, pray for us who have recourse to thee"). In addition, when St. Bernadette Soubirous asked the Virgin Mary on March 25, 1858 to identify herself, Mary revealed to her saying, “I am the Immaculate Conception.”
God created Mary without the corruption that original sin brings. In Luke 1:28 the angel Gabriel greeted Mary as, “full of grace, the Lord is with you” which underlines that she was endowed with grace not as a result of the angel’s visit but indicates that she was graced in the past with continuing effect in the present. She remained free of every stain of personal sin her whole life, through God’s providential action.
The Dogma pronounced by Pope Pius IX in 1854 assured the singular grace and privilege of God given to Mary in the first instant of her conception based on the merits of Jesus Christ, the Savior of the human race. We are very familiar with all the fine art and paintings of the Annunciation, however, an angel is also displayed at the image of our Lady of Guadalupe. An image that is beyond human possibilities to replicate.
Since ancient times the Feast of the Immaculate Conception was celebrated on December 8, thus it is interesting that on December 12, 1531 the Virgin of Guadalupe, or Nuestra Senora de Guadalupe, appeared for the last time to the Aztec boy Juan Diego. She told him to collect roses in his cloak and bring them to the bishop. When Juan Diego opened his poncho not only did the twelve roses fall on the floor but also the image of Our Lady was imprinted on its fibers of the Tilma.
To keep in mind, from December 8 to December 12 are exactly five days. An Embryo will be 120 hours post conceptionem near the fundus uteri.
If you were a placentologist (one who studies gestation and embryonic development) you might see the image of Our Lady of Guadalupe with different eyes. You might see that the image reveals our Lady in the womb of her mother Anna. You will make out the red myometrium surrounding the image. The whole shape of the image will certainly remind you of the shape of a uterus in pregnancy. The “baby,” i.e. the inhabitant in utero is well situated at the fundus, between both uterine tubes. 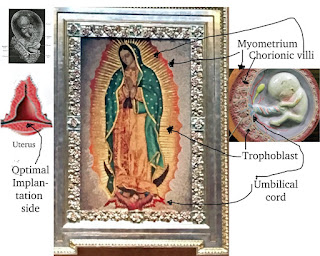 The medical scholar will see the chorionic villi, the fundamental structures, and the importance they have in the fetal-maternal interface of the placental-uterine anatomy. In the Guadalupe image, Our Lady is standing on the moon. The hypothesis that during the waning moon higher progesterone levels prepares the womb for the possibility of new life is often discussed in science. And beneath is the (previously mentioned) angel situated. 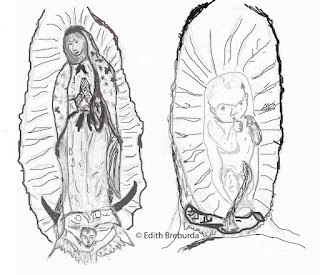 Implantation occurs in humans 7.5-9 days after conception. Modern contraceptives hinder an embryo from implantation. The uterine lining, sometimes compared to rose petals, is not prepared for the invading embryo.

His Eminence Cardinal Raymond Leo Burke, is well known for the shrine he established in La Cross, Wisconsin for Our Lady of Guadalupe. Many pilgrims come to her as the Mother of the Unborn. The Cardinal himself declared most recently that the, “so-called ‘contraceptive mentality’ is essentially anti-life.” Furthermore, Cardinal  Burke stated, “One also thinks of the other most grievous moral evils of our time, for instance, the plague of procured abortion, the wholesale murder of the unborn in the womb, justified as the exercise of the so-called right of the mother to choose whether to bring to term the baby she has conceived. More and more, too, we face the abhorrent practices of the artificial generation of human life and its destruction, at the embryonic stage of development, which are justified as the means to remedy infertility or to find supposed cures for crippling or deadly diseases.” (5)
Cardinal Ratzinger’s homily before his fellow cardinals in 2005 refers to the, “dictatorship of relativism that does not recognize anything as definitive and whose ultimate goal consists solely of one’s own ego and desires.”  When in 2005 Pope Benedict XVI received the St. Benedict award, he added,  “If there is a lack of respect for the right to life and to a natural death, if human conception, gestation and birth are made artificial, if human embryos are sacrificed to research, the conscience of society ends up losing the concept of human ecology and, along with it, that of environmental ecology.”
When Our Lady of Guadalupe appeared to the Aztec Juan Diego, the horrible spectacle of human baby sacrifices to their god Huitziopochtli ended. In this regard, it is more than consoling to see Our Lady of Guadalupe as the Patroness of Synthetic Babies, which seem to be only created for our "scientific" purposes. Essentially, an embryo at his first moment of his life has all information and only needs to grow. This makes a one cell stage embryo so desirable for genetic editing and engineering, CRISPR-cas9 ... When a female baby is born, she carries all of her egg cells for her children. Interestingly, our Lady of Guadalupe is portrait with child herself in the womb of her mother Anna.

1) Johnson, Bonnie: "And Baby Makes Four: for the First Time a Surrogate Bears a Child Genetically Not Her Own". May 4, 1987